Do you remember those tests they gave you in elementary school where the teacher told you to read the directions as she passed them out? The first two lines read, “Read all of the directions before beginning the test. Write your name at the top of your paper and put down your pencil.”

There were students who did just that and then sat, swinging their feet and twisting around to spy on all the students who raced to finish and answer number 15. 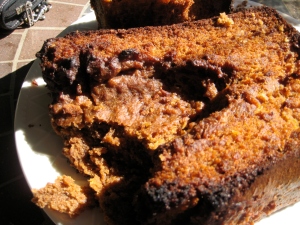 I think this might be why I’ve always struggled in the kitchen.

“It’s just what?” I asked him, incredulous that I’d waken from a nap after a killer hike to find this anomaly cooking me a homemade meal in his kitchen.

It was a pivotal moment. Maybe even the moment I knew I was in big trouble and that I wouldn’t be going anywhere, ever. He was also a navigator of a naval vessel, and I couldn’t find my way to the store in D.C. without my GPS.

When my car was broken into and they stole the GPS, I was at a loss of  how to get to the store to buy another one. So I could get to work.

So, it’s no surprise that I tried to make pumpkin bread (with homemade pumpkin I cooked myself, mind you) and banana bread (with a batch of blackened bananas) in two bread makers just to see which one would come out first and best.

AND I used a recipe that said to bake it, in the oven. There was nothing at all on there about “this is a recipe for a bread machine.” Well, apparently they take two different recipes, the oven and the bread machine. Now, how in the hell was I supposed to know that?

I didn’t take a picture of the mess because I was too busy punching the air and cursing anything and everything I could see. (The baby was asleep, okay?)

My husband says, “Just put them in the oven for 20 minutes. Maybe cut them open down the middle or something.”

So, there isn’t anything green about this post unless we ate it anyway which equals zero waste. So, guess what we did?

Oh, yeah. You’re not going to see anything but dust in my trashcan–IF IT KILLS ME.

What have you refused to waste—-for whatever reason, I don’t care.

Other lovely bread making recipes and stories, mostly of pumpkin: