On my way home from my mom’s this last visit, the car decided to break down. At midnight. On the expressway. Hours from my house or my mom’s. Just me and  baby.

The Indianapolis police force waited it out with us in the dark until AAA whizzed to the rescue. Oh, but then there was the car seat issue. Getting it out of the car, getting it in the car and the fact there really is no place for a car seat in a tow truck, now is there?

So, after a police escort to the only hotel in town that seemed to have a bed, I was thrilled to find they supplied a pack n’ play—-if not a crib. (When I go out-of-town, I take along the pack n’ play that my cousin Mary so generously gave to me. They are a wonderful little bed away from home for the baby.) 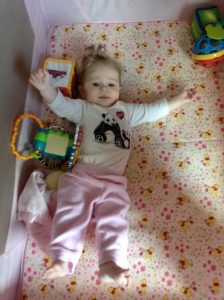 I didn’t think to pull it out of the car. I already had the cooler, the car seat, the diaper bag and two other bags. My plan was to get it in the morning.

Oh, but the mechanic wasn’t opened on Saturday. I didn’t quite catch that one either. It was two in the morning by that point, after all. And then it was Labor Day weekend so they wouldn’t be opened again until Tuesday. On top of all of this, my girlfriend and her daughter drove all the way down from North Dakota to spend Labor Day weekend with me and were already at my house, awkwardly fixing my husband dinner.

We all made the decision it would just be easier if my mother drove up to get me, my friend returned home and after I sorted out the car, I would be on my way.

It took me another week to get home. The pack n’ play remained locked in the trunk which I could no longer get into because the AAA driver dropped the key in the drop box at the mechanic’s (who was no doubt out fishing for his Labor Day weekend)—-and of course, I only have one key. 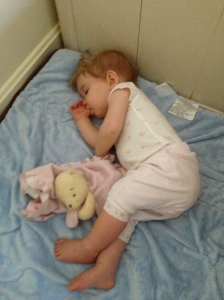 And so, we used a make shift bed. Which I think is being pretty green—using what you have rather than going out and getting another of anything.
And she slept just fine.
We had to junk the car and I borrowed a car to get back home.
But we made it. 🙂

What’s the craziest thing you’ve ever had to do with your kids in a stitch?

5 responses to “The make shift bed”