We dined at Subway’s. While there, we got to talking about Larry’s subs. Are you familiar with Larry’s Subs? We weren’t either but they are a fantastic subway shop similar  to Jersey Mike’s that we stumbled across while in Georgia. What surprised us? How environmentally friendly they were. Subway vs Larry’s? Let’s take a look.

During the hotel stay we could use the Subway cups multiple times for milk and coffee, but not so much once we moved out of the hotel. I’ve tried to compost them before and they don’t break down. So, we were left with a cup we couldn’t use again. 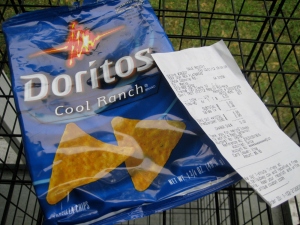 Subway = a chip bag that could be sent to Terracycle and a receipt which we shred and goes in the compost. Napkins I’ll keep since we don’t use paper towels and if I need to check the oil in my car or clean up something greasy while cooking, that’s what I’ll use.

Subway also gets kudos for their cookie bag, which also goes in our compost.

However, they automatically place your wrapped sandwich in plastic unless you remember to ask as soon as you get to the cash register that you don’t want one.  The sandwich wrapper also goes in our compost so, Subway–0 for the cup and 0 for the plastic. Everything else I can create zero waste. 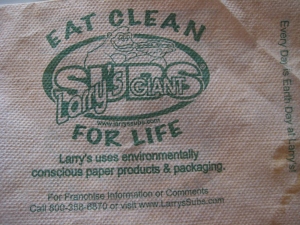 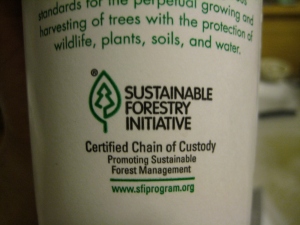 Everything could be composted, minus the chip bag. The chip bag could be sent to Terracycle. 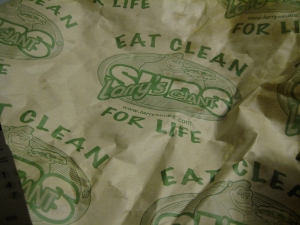 Hmmm. Looks like everything can be composted from Larry’s except the cup, which got points for the sustainable forestry initiative.  AND it’s all unbleached so I don’t mind using this compost in my garden.

Larry’s takes your wrapped sandwich though, and places it in a brown bag. If you have multiple sandwiches, they put it in one of these:

Surprisingly Subway didn’t do as poorly as I thought, but Larry’s still wins. I would be more likely to eat at Larry’s simply because they are taking the initiative to make a difference with their packaging. AND their subs taste SO MUCH better.

Do you have a sub shop you prefer? A restaurant you’ve noticed has taken the time to try to make an environmental difference?