If any of you have caught Oprah’s latest on her network, she’s doing a series on Love, and the town over from us is the star. However, most of the filming has taken place right here…. 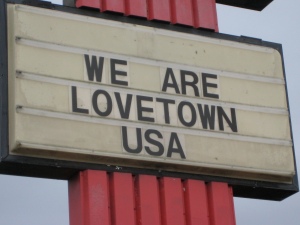 From what I understand, the focus is on eight couples which Oprah’s crew will try to bring together. No Bachelor/Bachelorette type of draw, these people all live in the same town and have never met. They are also choosing people to renew their vows and bringing couples back together who are on the verge of divorce. The festivities have been like Christmas. 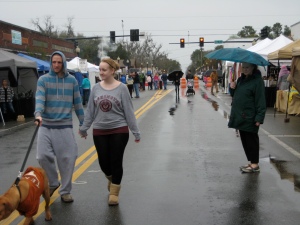 Oprah arrived aboard a Coast Guard cutter on the St. Marys River and has sponsored an entire array of festivities. I’ve made it to one–watching country music singer Sarah Evans belt out how she was born to fly. As the crowd stood in the rain to hear her, she asked, “So, how big is this town?” Someone called out, “We’re all here,” which made her laugh.

I went with my friend Peggy to go see what the love fuss was all about. I was also curious to see how environmentally friendly any of it was. Oprah can move mountains, after all. If her crew was environmental, imagine the repercussions…

I found the writing the most fun. I think Peggy did too. Encouraged to write acts of love, we tied them to the trees that decorate downtown.

Love letters were available on demand. You could write your own or our town theater buff, Barbara Ryan would write it for you and send it in the mail. I had Barbara address mine, so when the bright red envelope arrived the day after my husband pulled in from sea, he was completely thrown off! ha! Thanks Barbara!

The food served was all on styrofoam…of course. (Sigh.) 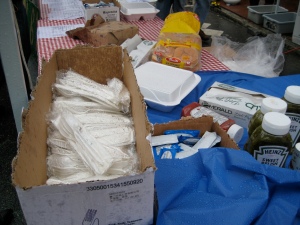 There appeared to be only one major food booth of smoking BBQ ribs and fries sizzling in oil–southern favorites. The line grew even in the rain. 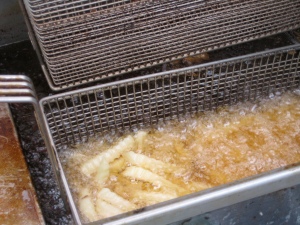 There were no recycling bins as the city of Kingsland simply doesn’t recycle—at all. Period.

A peek in the trash bin.

But filtering through the booths, I found a nice surprise. The artists and their work. I couldn’t believe the amount of either reused or recycled materials. And they were proud to tell you so. Reused and recycled copper by Don Copper Head Maxey, wood by Scott McGovern and Paul Riley, and metal scrap by Max Rogers.

Some of Don “Copper Head” Maxey’s work. The wall hangers glistened in the light.

The garden club made ferry houses and lovely Christmas ornaments out of all things found in nature. 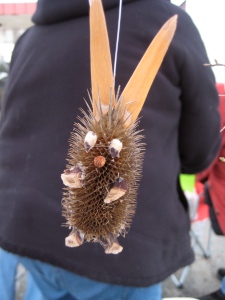 Every single piece the St. Marys Garden Club makes is a piece from nature. His eyes are made of corn.

And then there was Max—a 6th grader who scouts the local scrap metal junk yard on weekends and sees beauty where others see junk.  When he spots something he thinks he might create into art, he picks it up and he and his father weld it together. I heard another artist say, “You’ve gotta see this kid’s art.” He sold 100% authentic pieces—a swimming sea turtle, a dog whose head nodded via a spring. Mannerly and sincere, I found him refreshing with hopeful eyes. The next week his face appeared splashed all over the front page of the town paper. 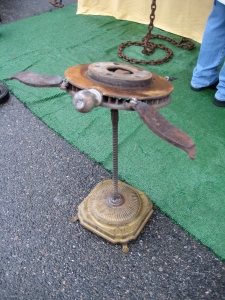 6th grader Max’s art. Imagination out of this world!

Another golden nugget was Nigel, a military man and avid recycler with his own YouTube page. I met him crushing cans on the street as we were leaving. Vibrant in personality and full of common sense, he told me he’d made over $4,000 in a year just recycling cans and bottles from his boat while stationed in CT. If people were paid to recycle like in the northeast, they’d be much more gung-ho about it. Nigel had brought his zeal down south with him and it was deeply appreciated. Kudos to Nigel!

Well, Oprah, you brought out the best in this town to sparkle and shine, that’s for sure. I was beyond impressed with her people. Here’s a video of our local love.