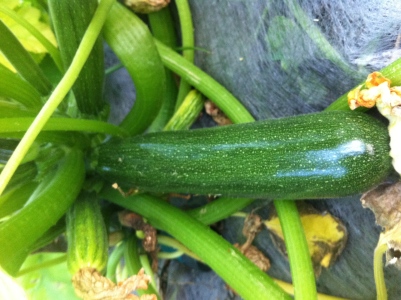 Our first garden together was last year. As children we watched our parents garden, but neither of us had ever tried a garden ourselves.

When you rent, you must ask permission. Some owners are more open than others. We’ve been lucky. Not wanting to destroy the yard, however, we took up only a small space. We bought two raised bed sets  so that we could break them down and take them with us when we moved. We didn’t harvest much food. The cherry tomatoes did okay. We had cucumbers out our ears. We had one tiny cantaloupe and a few jalapeno peppers. We planted the seedlings in the peat pots, which didn’t break down and caused the plants to grow root bound. And apparently, you need two of most plants to cross-pollinate. Now we know.

Out of excitement and lack of patience, I started my seeds indoors this year in February. I went by the back of the package. It said  in the region of Virginia to plant in March and early April. This contrasted to the gardening class at the Norfolk Botanical Gardens. They told us not to plant until mid-April to keep from losing seedlings in the last frost. The seedlings grew too tall and started to bend. We lost 2 squash and 1 zucchini because of bent stems. So, we jumped the gun and planted the 2 remaining squash plants in a planter in the front yard. 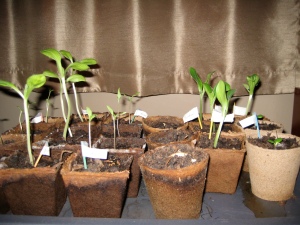 This year we’re moving in the middle of the growing season. I started the seedlings in the house but before we could plant them, we received orders for the move.

Since  my brother-in-law is also stationed at our next base, we asked if we could use his backyard to plant our garden. He generously agreed!

We broke down the raised beds, rinsed out the ants who adopted it as their home, and stuffed them in the car. Then I bagged up all the compost soil we’d made–at least 1 and 1/2 bags of heavy, rich, moist soil. As I opened the trunk to show my man what I’d done, I asked if he thought it was too extreme to take it with us, if people would think we were crazy.

“Yeah, we might pay more in gas, but we made it,” he said. We couldn’t leave it behind and buy new soil when we got to Georgia. It seemed pointless and wasteful. The fragile seedlings gave us the most grief. With each turn, one of us turned around to check on them like parents with a newborn on the way home from the hospital. We  lost two zucchini in the process, one which I dropped and broke as we walked into his brother’s house. It took all I had not to break into tears. I’d grown it from seed and driven it 500+ miles cross-country. That zucchini and I had a relationship.

At this point, I’m thinking there will be no delicious zucchini bread. I was not going to lose another one. The following day I stuck a plastic straw against the stem as a splint and tied it together with dental floss. The air conditioning repair man saw me and asked why I didn’t use a twig instead of the straw. “I think I was a farmer in a past life,” he said as he helped me. I held my breath and it took! It’s growing like a weed! I couldn’t believe the air conditioning repair man and I saved it with a splint! 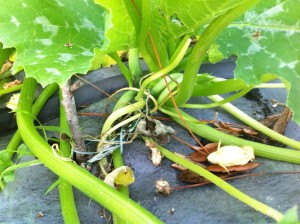 See the green dental floss tied to the stick on the left?

My brother-in-law sends us pictures randomly via his girlfriend’s phone. All the plants seem to thrive in the warm, southern weather. By the time we officially move from Virgina, it will be time to harvest. Since my brother-in-law did all the work, it’s only fair he gets the food! I only ask for enough to make zucchini bread.

Three things we did differently this year:  1. used  our own compost instead of the Miracle-Gro soil. (We did use two additional purchased bags of topsoil. It’s good to mix the soil and compost rather than use only one or the other.)  2. took the seedlings completely out of the peat pots prior to planting.  3. My brother-in-law waters with the Miracle-Gro liquid feed.

Only difference between these two gardens: dirt from compost used on left. (May 2, 2011)

My dream is to have a large garden and grow as much food as I want. Buying organic is expensive and self-growing would be the way to go. Lo, and behold, if the next town we’re moving to doesn’t have a community garden. I can’t wait to  meet other gardeners and learn more. Dreams do come true!

Oh, and out of the 2 squash plants we jumped the gun and planted here in Virgina in early April, only one made it. It’s  producing already. There are 5  tiny squash showing. We’re having one for dinner tonight. 🙂 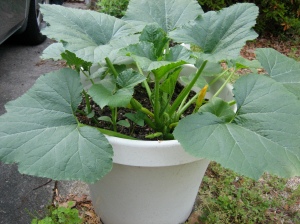 The only squash that survived out of 4.

Garden photos and gardening courtesy of my brother-in-law and his girlfriend in Yulee, FL.