We compost absolutely everything—food scrapes, grass clippings, leaves and yard waste, coffee grinds, dust and dirt from the vacuum, fingernail clippings, my husband’s hair from his haircuts. We shred all paper in the house and dump it in, and recently learned entire pizza boxes can be added. You don’t even need to break them down! After dinner this week, we looked at our plates and my man asked, “We can’t compost fish remains?” I jumped online and though some advised against it, others said to bury them deep within the middle of the bin. So it looks like fish heads, scales, fish skin and bones are compostable too. So far, it doesn’t smell bad. This is only recommended, however, if you have an enclosed bin because it can attract animals. If you know of anything we’re missing, by all means, comment on the post and let us know!

My husband’s all-time favorite line is, “Throw it in the compost.” His hobby and passion is making dirt. He’s had a compost pile every place he’s ever lived.

In D.C., he created one by taking an old trashcan and cutting out four pie pieces from the bottom ( a cross remained to maintain the shape of the trashcan). Cutting out the entire bottom works too. On 4 sides, he drilled holes 3/4 of the way up, spacing the holes 2 inches apart. You either drill the holes or take a hammer and nail to poke the holes. The simplest video I’ve seen thus far is by  Danielle Lessovitz on YouTube. My mother did exactly what she said and it’s working out swimmingly.

In Connecticut, we had multiple piles in the backyard along the tree line. (Deer and raccoon often raided those.)  The more often you turn the pile, the quicker you’ll get compost dirt. 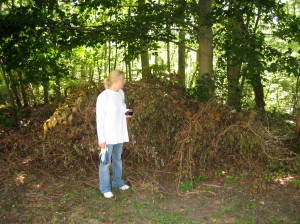 In Virginia, we broke down and bought a container from Lowe’s. It looks nice. It’s not untidy like a pile and is easy to move because it breaks down. Because of its black color, it maintains heat, but we have no proof it breaks down the compost faster than the Rubbermaid  trashcan in D.C.

A compost pile works just fine; you DO NOT need any type of expensive container. If you want to compost fish remains, if you move constantly like we do in the military, or if you want the neat appearance of a bin in your yard, sure, buy one.  There is nothing complicated about composting. Don’t let anyone tell you that you need some expensive container from a store. If you have any questions, I’ll tell you anything we’ve learned so far. Just ask me. 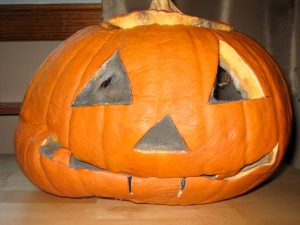 Couldn't wait for it to rot so we could put it in the compost!

My former landlady used trench composting, burying food scrapes directly in the garden in between rows of vegetables in a pre-dug trench.

The rich, black soil the compost produces saves us money when it’s time to plant flowers or start the garden. We don’t have to buy any soil at all. The seeds thrive. The problem is that with the frequency of the moves, we often have to leave the soil or the compost pile behind. If the renters who move in after us put it to use– is anyone’s guess. This last time, we worked so hard making the dirt; we bagged it up, distributed it throughout the car and took it with us. I’m sure we used more gas in the process.

This week I scored! In many grocery stores, corn is shucked right there in the produce department. I asked the woman working what they did with the husks.
“Throw them out.”
“Could I have them?  I asked. “We compost everything.”
She looked around. “We’re not supposed to give food to the customers for fear they might eat it and get sick and we’d get in trouble.” She thought for a minute. “I guess you won’t be eating the husks though.”
I smiled and shook my head.
“Well, my supervisor isn’t here and the guy I work with doesn’t care. If I bag them up for you and put them in a shopping cart, you have to get them out of here.”

I pushed them out like I owned the place, like I knew exactly what I was doing. If someone had asked, I have no idea what I would have said.
I stuck them in the trunk, buzzing with excitement.

When my husband arrived home, I told him I had a surprise for him in my trunk. I always say that when I pick up beer for him. Expecting beer, he opened my trunk.

“What’s this?” he asked smiling.
“Corn husks for the compost!”
He peered in my trunk like it was Christmas.
We took them around back and completely filled the compost bin to the very top. She’d even thrown in some bruised and rotting fruit.

scraps saved from the grocery store

We stirred it later in the week and the decomposing had already begun. It had decomposed about 1/4 of the way down already! It steamed as we stirred it. And no, it didn’t smell at all. Victory! 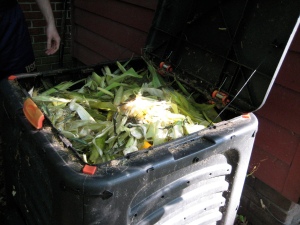